I’ve just read a book. No surprises there. It was OK, I suppose – I’d probably give it a 3-4 on Amazon if I left a review. It was readable, certainly. Not unputdownable (if that’s even a word) and it didn’t have a twist-I-wouldn’t-see-coming. Or did it?
I can’t review this book. Because if I did, I’d have to say what I liked/didn’t like. And what I didn’t like would be a massive spoiler and unfair on the author and future readers. It’s published by Thomas & Mercer, which I believe is Amazon’s own publishing arm? All the more reason not to put spoilers in reviews!
You see, the twist-I-wouldn’t-see-coming should have been obvious for anyone with half a brain to work out – if the author had played fair with the reader. And by playing fair, I mean been transparent, let the reader properly experience the story through the eyes of the characters as it unfolds. In this novel, we have 3 distinct points of view so we ought to be completely inside the heads of 3 different characters. Since all 3 characters interact closely throughout the story, I’d expect – as the reader – to be fully immersed in exactly how the each POV-character is thinking and feeling in relation to the other 2 characters. But I’m not. It’s only in the final pages of the book that I realise that one character has done something pivotal to turn the story on its head. Thinking back, I can see that there is a clue (although it’s planted quite far on in the book, which doesn’t seem fair), BUT the character doesn’t think about this AT ALL throughout the entire novel. Not until the last two pages.
Now, I’m not a psychologist, but I’m pretty sure that if I was plotting to kill somebody. I’d be thinking about it constantly. Day and night. Anything written from my perspective would have to include those thoughts – especially if somebody else gets there first and murders my prospective victim! At the very least, I’d be thankful that somebody saved me the job and at least nobody will suspect me now! And to not even hint at it at all via the character’s thoughts is cheating the character and cheating the reader. Not fair.
No review from me.
No comments:

Serious and potentially controversial topic this month: Cultural appropriation. Hear me out.

It’s been a while, hasn’t it? So you all thought Aunty Debbie’s helpful problem page had ceased trading since the last post? Well, no such luck – I’m still here and still dispensing wisdom like oil of cloves on a rotting tooth. And probably about as useful …

Andy and I are currently binge-watching Netflix. That’s a strange 21st century expression – binge-watching. Watching a series to excess, gorging ourselves, although to be fair, sometimes it’s only an episode a night and we might even a skip a few nights if we are out and about. We’re season 5 now, of apparently 7 seasons and I have no idea where we are going or what might happen.

I’m reading a book about a boy. It’s a new paperback – I picked it up in Waterstones as part of a buy-one-get-one-half-price deal. I got up to page 6 and was tempted to throw the book across the room.

Why? Because the title says boy, the blurb says little boy and the cover shows a picture of a young (white Caucasian) boy. With all the references, I think it’s safe to assume that the cover is meant to depict the boy in question. But page 6, and the protagonist is pondering the ethnicity of the boy in question as he is so dark-skinned.

So why is our cover model white? Dark haired yes, and not white white. But clearly of Caucasian origin. Do the publishers think the book will sell more copies if the cover shows a white person? Does it matter? I think it does, yes. I read a lot of articles campaigning for more culturally-diverse fiction and I think it’s important – especially for children – to be able to read about characters ‘like’ themselves, to identify with them and maybe aspire to be like them. I’m not far enough into this book yet to know whether said boy’s ethnic origins are important to the story, but since it’s important enough to mention and important enough to wonder about, it ought to be important enough to find a child for the cover that at least looks the part.

I’m not saying that all book covers should replicate the story in minute detail. God knows I’ve seen enough bad covers where the author has insisted on having a dragon, a sword, a red-headed female warrior, a magical artefact and a wizard with stars on his cape (because that’s what the story is about, don’t you know?) – and the result is cluttered, amateur and frankly silly. A cover is meant to convey genre, give you a hint of the style of the book and entice you to read the blurb and then the opening paragraph. But since the cover of my book is just a boy, why on earth couldn’t it be a dark-skinned boy?

And now I've just looked on Amazon and it's a title-stuffer: A gripping psychological thriller full of twists you won't see coming ... No really, I will. Trust me on that one. 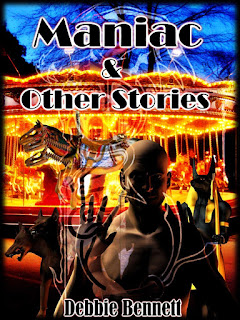 I'm leading a workshop on writing science fiction at the end of this month. Check out this link for more information and details of how to book a place.  I don't think the photograph is very flattering though!

For anybody who's come here via the link from Oldham Library - hello. While I mostly write crime and thriller fiction these days, I started out my writing career in the sf and fantasy genre and I've published a lot of short fiction, and a fantasy novel. If you want to check some of it out, have a look at my short story collection Maniac & Other Stories. You can probably even read a couple for free as part of the 10% sample online or on your ereader, so it won't even cost you anything ... If you've signed up for the workshop, feel free to email me at the address in the panel on the right and I'll send you an advance link to a page of resources that I plan to make available after the workshop.
No comments: 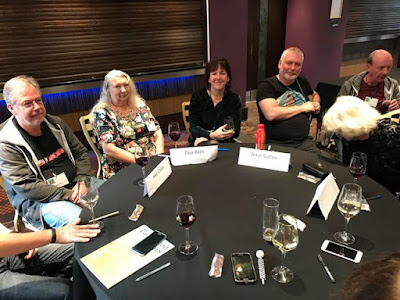 The Alchemy Press book launch in Chester on Saturday. I seem to be sharing a name with Tina Rath, but I'm the one on the right in a rather lovely little velvet dress I bought just for the weekend. The book is a horror anthology - but I don't write horror. Really, I don't. And don't let the name put you off; this is a collection of dark, strange and weird tales. Mine is called The Fairest of Them All and if you couldn't guess from the title, it's about mirrors ... The rest of the stories are pretty good, too!

You can get the book here. 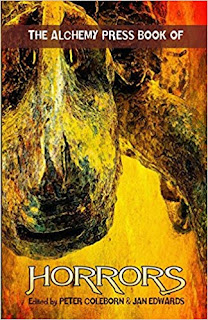 Email ThisBlogThis!Share to TwitterShare to FacebookShare to Pinterest
Labels: alchemy press, alchemy press book of horrors, debbie bennett, the fairest of them all
Older Posts Home
Subscribe to: Posts (Atom)