Reeltime Pictures are pleased to announce a new drama production for release on DVD to celebrate the 50th anniversary of Doctor Who.

White Witch of Devil’s End is a spin-off from the highly regarded Jon Pertwee Doctor Who story The Daemons and will star Damaris Hayman reprising her role as Miss Hawthorne. 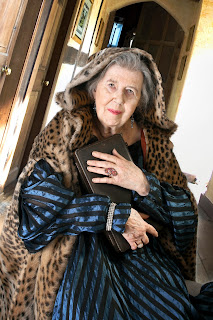 At the grand age of 84 (in June this year), you’d expect Damaris would be happy to be enjoying retirement quietly in her Cheltenham home … but no! When approached by producer Keith Barnfather about the idea she jumped at the chance. “I shall retire, I think in my coffin!  Miss Hawthorne was my all-time favourite role and I was enchanted by the thought of being her again for a little while.”

“I was amazed and delighted that, as an octogenarian, Damaris was prepared to take this on,” says Keith. “We had recently recorded an interview with her for our Myth Makers series profiling actors who had appeared in Doctor Who and I already knew she still had a hunger to act. But I really didn’t expect her to be so keen.”

Although eager to take the project on, Damaris knew she had to pace herself, so in an innovative move, director Anastasia Stylianou decided to film the drama in a “talking head” style – adding dramatic cutaway material to bring Damaris’s words to life!

Says Anastasia; “I knew it would be a challenge. We needed to film a 50 minute drama at least, so I decided to make an asset out of a limitation.”

Primary filming has already taken place at a cottage near Damaris’s home. The crew collected and returned Damaris each day – allowing her to return home each evening to recover and study the next day’s script!

“We used autocue to help Damaris,” says Keith. “It was an impossible task for any actor to learn so much dialogue. Damaris was a true professional and took to it instantly.”

With a planned release date of 31st October, which is appropriately also Halloween, Anastasia hopes to have the project completed for the 50th anniversary celebrations. “It’s just getting all the dramatic cutaway material ‘in the can’ that is crucial. The drama is really an anthology – a set of connecting stories about Olive’s life told, as it were, in her own words.”

When considering who to approach to write these stories which would exist within an overall theme, Keith immediately thought to contact old friend David J Howe at Telos Publishing. “I thought it would be fantastic to ask individual writers knowledgeable in the occult and magic to write each story and David, through Telos, knew so many of the best young talent in the country.”

“I was delighted when Keith got in touch,” says David Howe, “and immediately started to think of who might be a good fit for the project. Along with my partner, the award-winning author Sam Stone, we contacted several authors who we felt would be sympathetic to the material and were pleased to get them all on board for the project.”

“I took on the task of outlining the whole story,” says Sam Stone, “and then asked the writers to come up with ideas which fitted that framework. We needed to tell stories at different points in Olive Hawthorne’s life, and the writers rose to the challenge and delivered scripts which exceeded all my expectations. I then worked with them to refine the scripts into the completed screenplay.”

The writers involved in the project are, as well as David J Howe and Sam Stone, Raven Dane, Debbie Bennett, Jan Edwards and Suzanne J Barbieri, with a final script-polish from Big Finish writer Matt Fitton. All have brought a unique perspective on Olive’s life, and the end result is an anthology of tales which will surprise, entertain and hopefully move the viewer.

Does Damaris have any regrets about throwing herself into such a big commitment? “Definitely not! I was enchanted to work with Anastasia and Keith again, who are great friends anyway. After a lot of working together consulting over the scripts, I’d subsequently never enjoyed filming more - and I can’t wait now to see the final result.”