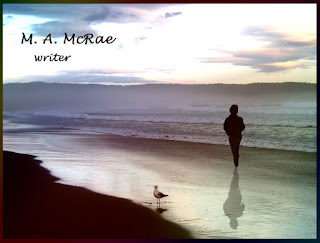 Not a Man is the first of my books that I considered good enough to be published. But there are so few agents and publishers in Australia, and of those there are, there are even fewer who admit to looking at unsolicited manuscripts.  While I tried them, one by one, each taking months to reply, I wrote a second book in the series, and then a third. Three full-length books – big books.

My family were never interested in my writing, so it was only after I joined the writers’ site run by Harper Collins, Authonomy, that other people read what I had written. To begin with, the reviews were overwhelmingly positive, comments such as ‘Elegant and touchingly surreal,’  ‘Absolutely fabulous writing and story,’  ‘writing of the finest quality,’  and  ‘Absolutely compelling, utterly original.’

But then it was attacked, viciously, as pornography. The comment had me feeling ill and considering taking it down, never to see the light of day again. There were more like that in the next days.  There was even one person who reported it to Harper Collins as ‘abuse.’ 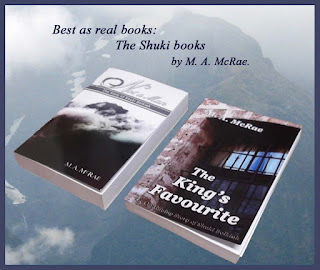 My story is set in a slum city of a Arabia. It is about a child of the slums, taken to be a bed-boy, and castrated in order that he would ‘stay beautiful.’ Shuki leaves that life at the age of fifteen, but for the early part of the book, sex with his master is a part of his life, the inevitable background to his life.  I only found out about that complaint by accident, as Harper Collins looked at it and dismissed it.

But there were also those readers who enjoyed Not a Man sufficient that they read it through,  then the second and the third story. People fall in love with Shuki. He is an unusual hero - a person courageous, intelligent and compassionate.

In due course, ‘Not a Man’ gained its position on the Editor’s Desk, winning itself a review. By that time, there were nearly 400 comments. While the Harper Collins review made suggestions for improvement, it was more positive than not. This is an excerpt:

Not a Man is an ambitious and insightful novel; it tells the story of Shuki, a young boy from the slums of Elbarada, a fictional area of Arabia, who is castrated against his will at the age of 10. Shuki’s journey is one of great trial but also incredible strength, courage, and determination, and as a hero, he is fantastic, evoking not only sympathy, but aspiration and reverence. I loved the fact that the operation which is supposed to prevent him from reaching manhood is the very thing that makes him strong and mature. The novel is written in a pared down manner; the narrative reminded me of the prose styling of Paulo Coelho: unaffected and matter-of-fact.

The whole review can still be seen on Authonomy.

By the time of the Harper Collins review, I had an offer from a UK publisher, which I was happy to accept.  Not a Man was published late last year. The sequel, The King’s Favourite followed in June, 2012, and I hope that the third in the series will be ready for publication by June 2013.

The Shuki books have not so far been big sellers, yet, each week, there seem to be a few more sales. So far, the reviews have been overwhelmingly 5-stars, with comments such as this: ‘Outstanding for its originality and depth, M.A. McRae’s Not a Man is an amazing work that will transport you to a foreign world. It will let you experience a lifestyle and culture that is most likely vastly different from any with which you are familiar’ and ‘Shuki's story and the stories of the characters whose lives touch his are still clear in my mind a year later. That's quite a book!’

Does it contain too much sex? Sex is a part of life, and sometimes, for whatever reason, it is needed as a part of the story. Not a Man is not close to pornography – the Harper Collins editor reviewed it as Literary Fiction, but all the same, when I started a different book, I put the sex firmly off-screen. 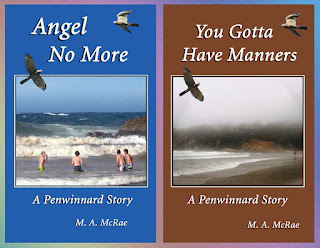 The Penwinnard Stories: Two of my Penwinnard stories have been published so far – Angel No More  and You Gotta Have Manners.  These stories are set in a Boys’ Home, one that its manager claims to be the best institution of its type in the UK and possibly the world. Its residents are welfare kids, orphans or victims of poor parenting, but the stories are not of faceless victims - they are of Jay and Bob and Sid and Gerry – lively boys full of personality, sometimes of mischief. The stories are much lighter in nature than the Shuki series, shorter, each less than 100,000 words, and the sex is firmly placed behind a veil.

Which is my best book?  Not a Man is my best book, without question. I made no compromise with Not a Man. It is an emotional journey, not easy to forget.
http://mamcrae-author.blogspot.com.au/
1 comment:

Roots of a Writer?

I'm feeling like some fantasy right now after months of gritty crime stuff. Time, I think, to go back to where I started, maybe?

I used to edit British Fantasy Society publications. Lots of them. For a long, long time. The BFS website used to have pages of covers from past publications (all lovingly scanned in by us oldies who have huge collections going back to the year dot) and a store where you could buy them. When I went to look for them for this blog post, those pages no longer seem to exist, which is a shame as they are not only part of BFS history, but also had some amazing artwork commissioned for the covers, and the books launched (or played a part in launching) the careers of many of the fantasy and horror writers around today. The delightful Nina Allan even mentioned me in her interview in the BFS’ latest journal – things like that make all the hard work worthwhile.

But there used to be an occasional column called Roots of a Writer, where different authors gave their take on writing and how they started out. It was interesting to read what inspired their love of fantasy fiction and what made them start writing it.

So my own personal roots began at university when the small paperback library was obviously stocked by fantasy fans and I devoured such things as Stephen Donaldson and other doorstep trilogies whose names I forget now. I’d grown up reading Heinlein and Wyndham, so it was an easy transition into the fantastic. Then I met a guy called Sean – we were never boy-and-girlfriend, but I can say that apart from my husband (and father/brother of course), he was probably the most influential male in my life as he introduced me to the whole fantasy sub-genre – all the books and the people who loved them. The wargames crowd at university, D&D, live role-playing and everything that fired my imagination from there on in and made me the person I am today. From there it was a simple step into the British Fantasy Society, where I was deeply involved for many years.

I read and write a lot more mainstream now. Since the BFS has aligned more to the darker side of fantasy and horror these days, I have less in common with it, although I remain a member. But I do still write fantasy. I have an almost-completed sequel to YA Edge of Dreams which I think I might go back to, and an adult fantasy I started writing with input from an editor at Orion many years ago. What do you think?
2 comments: