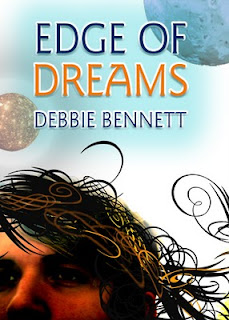 So here is the final cover for my YA fantasy Edge of Dreams. Not quite ready to publish yet - it needs a last edit for typos and to murder any remaining extraneous adverbs - but I'm pleased with the way it's come out. I'll post links to it once it's uploaded but I just wanted to share it with the world now.

What do you do when you think that the bad guys might care more about you than the good ones?

Edge Of Dreams is now available in kindle format on  Amazon UK, Amazon DE and Amazon US/Other.  Also in all formats (including PDF and HTML) at Smashwords.
No comments:

Checking through recent submissions, I remembered having a short story Moira accepted by online fiction site Every Day Fiction. I was sure they'd said August or September so I went back and checked their listings and found that I'd totally missed it on August 16th! I think I was supposed to get an email beforehand, but in fairness, the site had a major systems crash mid-August so I suspect my email was one of the casualties!

Anyway, it was a nice surprise to go back and read it online and find out that 56 people voted it at a 3.7/5 star rating. And lots of lovely comments too.
No comments:

An extract from WIP Paying The Piper:

The rear tyre blew at eighty-five miles per hour in the outside lane of the M25, just past junction eleven. Amanda didn’t hear it go, but she felt the steering wheel wrench from her grip just as Mika launched into Grace Kelly on the car’s CD player. The screech of tyres didn’t improve the quality of the music as the car swerved towards the central reservation, and the scrape of metal against metal seemed perfectly timed to the song.
She pulled hard to the left, narrowly missing the Renault in the middle lane. The driver flashed his headlights several times in succession, overtook on the inside and accelerated away out of danger, making a crude gesture with his fingers as he passed her. Just like a man. Anything to avoid trouble. Never wants to get involved. The car skidded on the wet road and she hit the brake instinctively, only deepening the skid as all four tyres lost contact with the tarmac.
Suddenly, the world reduced to four wheels and an engine. Frantically, she tried to remember what they’d said on the advanced driving talk which the office had laid on for them all. Two winters ago, when five company cars had been written off in as many weeks, the firm had decided that a driving seminar was called for. At the time, all the staff had been concerned about was the fact that they were expected to come in for an evening without pay; right now, Amanda reckoned that survival would be payment enough. She eased her foot off the brake and steered into the skid, thanking whatever Gods were listening that there were no other cars on the inside. The motorway was quiet and most sensible people would be at work, not speeding round the M25 with their life in ruins.
Surprisingly enough, the car responded. She could feel the difference through the steering wheel as the remaining tyres began to grip the road. She touched the brake once, twice – cadence braking, just like she’d been taught – and the car slowed and straightened as she eased it across to the inside lane and onto the hard shoulder. Coming to a standstill, she switched off the engine, cutting Mika off in his prime. The sudden silence was overwhelming, the smell of burning rubber filled the car and she wondered what she was going to do now.
For the third time that day, Amanda burst into tears. It hadn’t exactly been a spectacular success so far. She’d been on the move three hours now, ever since arriving at the nursery at lunchtime and discovering that Paul had already picked up Melanie. At home, she found he’d taken a suitcase; some of his clothes were missing, and a stack of nappies had gone with some sleepsuits from Mel’s room. And three hours later, where had she got to? Halfway across the country, with what seemed like days stuck in a motorway tailback on the M4, and no nearer finding her daughter than she had been when she’d set out with just her handbag, and only that because she knew it contained her credit cards and phone and the one thing she was going to need was money. Money for petrol and food, probably somewhere to stay the night and no doubt cash to bribe his family. Because that’s where he’d be, running home to mummy and that awful interfering sister of his. Running home with Melanie.
Mel. The thought made her cry even harder. How could he have taken their daughter with him? Aside from the fact that he knew next to nothing about caring for a nine-month old baby, Paul had never given any indication about the way he felt before. True, he’d never been a man of many emotions; that’s what she’d loved about him – his calm competence, easy acceptance of redundancy and the optimism with which he’d set about finding himself a new job, even when it had involved a move across the country. She’d gone willingly, six months pregnant and excited at the thought of a new life together. And then it had all started to fall apart.
Damn Bristol. She thumped the car horn loudly with her fist, wishing it was somebody’s head. Damn Carroll’s Limited; there was nothing limited about the liberties the directors were apparently prepared to take with their employees. And damn to Hell and back Mark Cartland for taking her to the office post-Christmas party and then to his bed. She hadn’t meant it to happen, hadn’t set out with the idea of adultery in her mind, but Paul had been working late again, keen to impress his new boss and she’d been lonely in the new house. Mark had been so understanding when she’d had to take time off at short notice when Melanie was ill. She couldn’t refuse his invitation. She hadn’t wanted to. He was a nice guy in his own way, though not really her type. Besides, nobody else had asked her to accompany them to the dinner at a local hotel and as usual Paul had been too busy.
Stop making excuses, Amanda. You slept with your boss and your husband found out. End of story. Who could blame Paul for the way he’d reacted? But how could he run off like that, without giving her the chance to explain, to apologise and try to make up for what she’d done. It was as if he didn’t want to know any more. Perhaps he would never be able to forgive her. Perhaps he’d never let her see Melanie again.
No comments:

... in a galaxy far, far away, I used to be into live fantasy role-playing (aka LRP/LARP to those nerds in the know). In the early 1980s, LRP was really only starting out in the UK and I spent many weekends with a group of like-minded nerds - and I mean that in the most affectionate way - from Liverpool University at Peckforton Castle in Cheshire, playing Treasure Trap. If you really want a laugh, click the link. I knew these people. I was one of them...

So there we were, spending weekends camping in a real live castle, with one toilet between however many people were staying. I think there was a shower put in much later, but let's just say it wasn't a health spa. Mostly in bizarre costumes, we'd eat down the local pub and drink into the small hours in the top of one of the towers. Then there were the adventures: many hours enacting various quests throughout the castle. I say enacting, but those of you who have ever played Dungeons & Dragons will understand it's more like free-form acting, with an overall end objective, but you kind of make up the rest as you go along, keeping in character of course. Anything can happen - and often does.

I was writing back then too, and if you are a fantasy writer, you really can't beat the experience of living some of this - I can give you an exact reaction to creeping along a stone corridor in the dark, rounding a corner and coming across a 6ft long-haired, bearded bloke, built like the proverbial brick shit-house, wearing studded leather and wielding a steel sword. Or watching an execution on the drawbridge by flaming torchlight. Or abseiling from a tower while a horde of mad people are firing arrows at you. I've lost touch with most of the people from this part of my life, which is a shame as they were a great bunch of guys and we had some fantastic weekends.

Fast-forward a few years and I'm supposed to have grown up as I'm married with a mortgage and a job. But I'm talking to some like-minded people on CIX and get invited to participate in a Star Wars event in South London. I get a kit list sent to me, with joining instructions and a character sheet. Bear in mind I've never met any of these people before, but I venture off to some disused warehouse that has been decked out for the day, get my laser tag equipment and we're off on a 12 hour adventure loosely set in the Star Wars universe. I had one of the best days of my life, totally immersed in an alternate reality, trying to steal a secret CD and divulge vital information to the opposition (yes, the traitor was ME, mwha ha ha...). Came back through Waterloo station in costume late at night with some of my compatriots and we did get some strange looks, although this was fortunately well before all the terrorist alerts.

So I apologise to anyone who knows me. I was a nerd. And I loved it!
3 comments: